Let's take a look at a usual drawing of an atom. 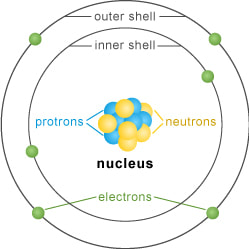 While it is easier to draw an atom as a flat, still structure, the reality is, each electron moves so fast that it could be at any time around a nucleus, and it is hard to predict where it is. It's a little like the blades of a fan; you know that at any point in time, they are somewhere in that gray area, but you are never sure where.

What we do know, however, is that electrons are organized a certain way around the nucleus. Not all electrons have the same level of energy; so, they organize in layers of possibility, a little bit like an onion.

After experimenting with atoms, a scientist named Erwin Schrodinger discovered that the electrons choose their layers in a very predictable way.

In fact, he even made a formula for it.

Most atoms need to have at least two atoms interacting with each other; the gas Hydrogen, for instance, is actually made of two atoms of Hydrogen combined.

The atoms combine with each other by sharing energy. Think of the onion -- the very last layer has the most energy, and it's that outer layer that melds together to form molecules, such as proteins.

Below is a model molecule of the gas Oxygen. There are two lines between them because they share the energy of two of their most external atoms.

Get the molecular model kit and try to make a water molecule.
The formula for water is H2O -- how does that look?
Read the formula as "Hydrogen 2, Oxygen 1" -- If there is nothing under a letter, then it is always 1!
That was easy, right? But some molecules can get quite complex.
How many atoms of Nitrogen are in a molecule of Caffeine, for instance?
Caffeine: C8H10N4O2     ----    There are 4 molecules of Nitrogen!
Carbon 8, Hydrogen 10, Nitrogen 4, Oxygen 2.

You will now build more complex molecules with the molecular model kit.
There are three molecules to build; they will get harder as they go.
Tip 1: The Hydrogen atoms can only bind to one thing. For this reason, you can think of them as "hole stoppers" at the very end.
Tip 2: Carbons very often form chains in a molecule (several in a row).

Please build these one at a time.
After you finish building a model, please check with the teacher for accuracy.

Once you finish all the models, pick your favourite.

Get a piece of paper and use a ruler and compass to make a draft of the model as a drawing. Please make it big -- it should fill the page.

Using the light table, move this sketch to a good watercolour paper.

Paint the molecules in the right colours.

Please label your drawing with a sharpie , for instance, "Sodium Chloride", and place it in your binder under "The Nature of Things".

You only need to draw and paint one molecule! Don't do all three. Too much work!

If you get stumped, you can look up the molecule on Google, but please try a little bit first! It's like a puzzle. Puzzles can be fun!

Celebrate! Woooo! That was a hard one! Have some candy!!!