Other Factors that Affect Climate

So, what other factors affect climate?
1. Earth's motion affects climate
The amount of sunlight that reaches Earth is affected by the tilt of our planet on its axis and its orbit around the Sun.

How might the change in tilt affect our seasons?

Because Earth also wobbles on its axis, it is not always tilted in the same direction. A complete wobble takes about 26 000 years. This wobble is called precession.
Knowing about the slow changes in Earth's orbit and tilt explains the change in climate that take place over tens of thousands of years. These changes have sometimes been dramatic, but they happened slowly.

When sunlight hits the Earth's surface, it is either absorbed and converted to heat or reflected back into the atmosphere. The amount of light reflected back from a surface is called its albedo. Surfaces that reflect a lot of light have a high albedo. Those that absorb most of the light have a low albedo.

Surfaces with a low albedo appear dark because they absorb most of the light that hits them. The light is converted into thermal energy, causing them to warm up. Surfaces with high albedo appear lighter in colour and remain cooler.

On a hot and sunny day, would you stay cooler wearing a dark-coloured T-shirt or a white one? Why? Write your answer on your worksheet.

The albedo of surfaces on Earth varies. Snow and ice reflect almost all the sunlight. Why do you think a lake's surface appear dark? Reflect on this on your worksheet. 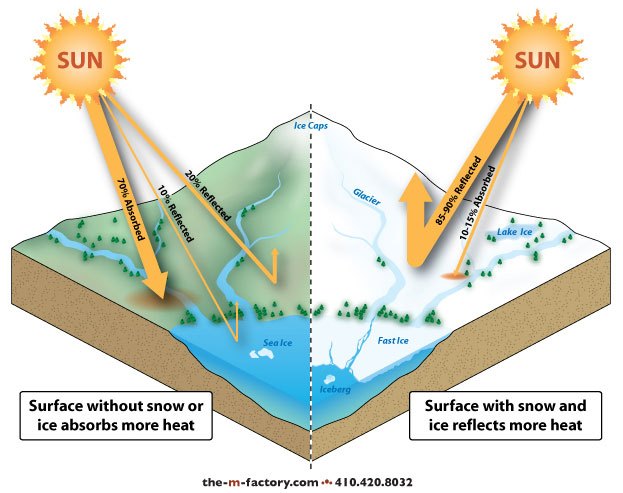 Clear-cutting can increase the albedo of a forest during winter if the open areas become covered in snow. Would clear cut areas be warmer or cooler than areas covered in trees?

Why or why not?

The albedo on Earth's surface changes naturally over time and can alter the energy balance and temperature of Earth. Large parts of Canada are covered in snow and ice during the winter. Because snow and ice reflect more sunlight than grass and open water, the albedo changes.

A change in albedo also can increase the speed in which ice melts. Surfaces covered in snow and ice have a high albedo. As the ice melts, more light is absorbed by the open water.

While the albedo effect can cause changes in a small scale, it can also disrupt the whole Earth, as you can see on the video below:
3. Natural events affect climate

Some natural events can cause short-term changes in Earth's energy balance. These changes can affect the weather patterns for a year or more, but have no effect on long-term climate patterns.

The Sun's activity can alter Earth's energy balance. The amount of energy emitted by the Sun varies over time. These variations can cause both short-term and long-term changes in Earth's climate. Over the past 30 years, the Sun's energy output has declined slightly.

Volcanic eruptions can release large amounts of ash high into the atmosphere. In extreme cases, they cause the atmosphere to reflect more sunlight than usual. The result is a short-term cooling of Earth lasting from a few months to a year or more.

Changes in ocean currents can also cause short-term changes in weather. During an El Nino event, parts of the Pacific Ocean are warmer than usual, affecting temperature and rainfall patterns on land. Temperatures may be warmer than usual and precipitation may be less than normal.

What can happen to the environment and the people who live around it, if temperatures get warmer and drier?

Using what you know about the ALBEDO effect, how could you make a city cooler? Talk with your group and come up with five different ideas.

Below, a completely random and cute story, so you can forget about climate change a little bit.

Follow this link to continue learning about climate change:
Consequences