Fossils - What are they and how are they formed?

Fossils are the evidence of life from the ancient past. Without fossils, we would not know as much about evolution as we do today! Fossils tell us what kinds of animals and plants existed on Earth a long time ago, but also how they lived, what they ate and what their environment looked like.

A scientist that studies fossils is called a paleontologist.
​
As new fossils are found, we understand more about our own past and how we evolved.

Animal fossils give us a lot of clues about an animal's environment. For instance, think of the triceratops; they had massive horns and a shield around its head. ​How would these adaptations help it survive? What would these be good for?
The fossil above is a complete triceratops skeleton. Look at the bones on the legs; now look at the rendition by an illustrator on the right. Do you think they match? What would you do differently to make it closer to the way it most likely was?

It is hard to know what a dinosaur looked like; we have to compare it with animals we have nowadays to understand how prehistoric animals were built.

Fossils are formed from an entire organism or from parts of an organism, such as a bone or a shell. Fossils can also be formed by footprints, scat and plants.

The best-preserved fossils happen when the environment somehow isolated the organism from decay. As more and more layers of sediment and earth get deposited on top of the specimen, all the water is squeezed out of it and minerals from the soil replace the biological material found in the organism, turning it into stone. This process is called petrification.

One of the most important fossil deposits in the world can be found right here in B.C.

It is called the Burgess Shale, located close to the Alberta border in the Yoho National Park. These fossils are from the Cambrian period, over 500 million years ago. These deposits are important because they show the imprints of the soft parts of the animals, in effect producing a drawing of what the animal looked like.

One of these animals found in the shale was the anomalocaris, a two-meter-long monster possessing primitive eyes. The findings enabled paleontologists to come up with the depiction we know today. 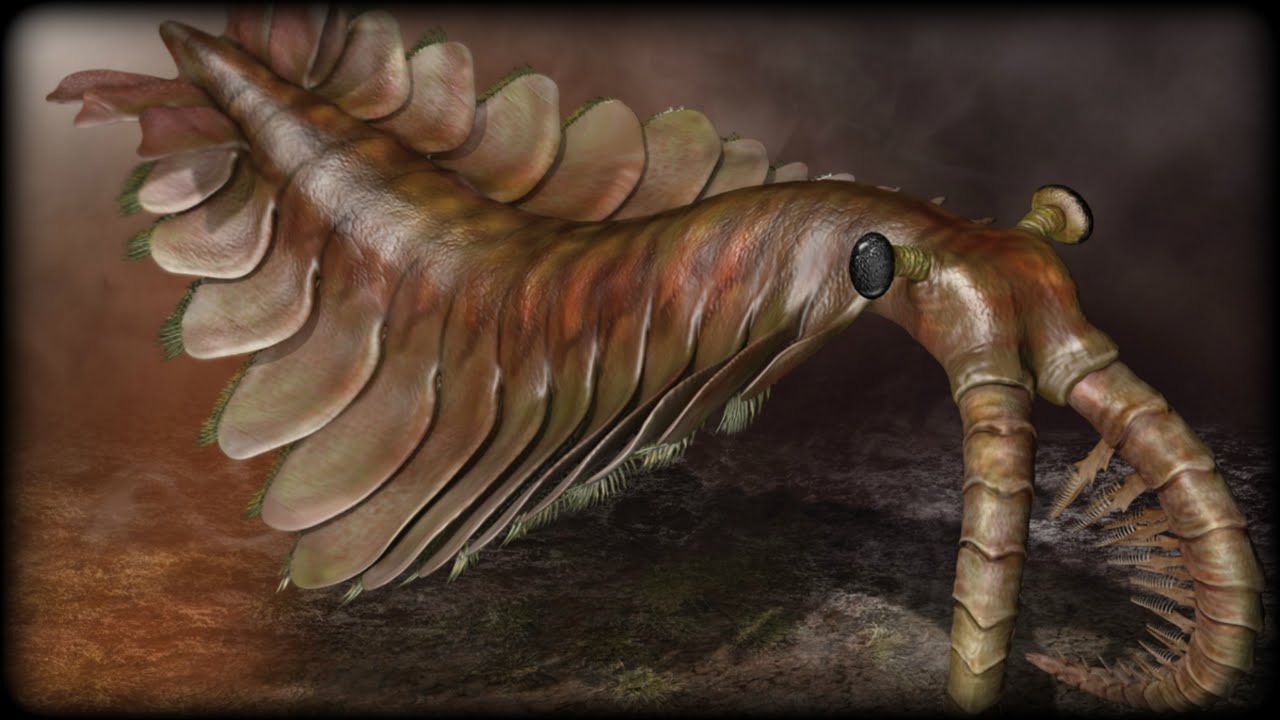 Below is one of the well-preserved anomalocaris fossils found in the shale. 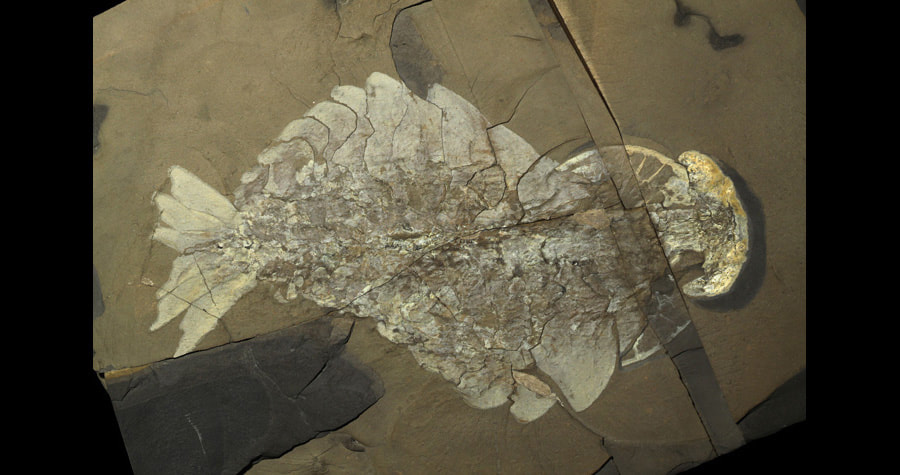 The fossils enabled us to understand the life-expanding period known as the Cambrian Explosion and how all the lifeforms fit together in harmony. It turns out every species had their place in the food chain, just as they do today.

There were the swimmers...
...the grazers...
...the predators...
...the scavengers...
...and the filterers.
How did these fossils become so well preserved? It turns out a mudslide happened a long time ago, isolating them from Oxygen and bacteria that would have decomposed the organisms. This happened fast; the animals barely saw it coming. Many fossils are formed this way.
The Cambrian was home to other very unique species, such as the Hallucigenia (left) and Marrella (right) seen below.
These Cambrian animals actually lived far away, near the Equator; after millions of years, tectonic plate movements displaced the now-petrified shale, pushing them up and eventually exposing them here in B.C.

Not all fossils are found in sedimentary rocks. Sometimes, tiny organisms get trapped in tree resin, just like the movie Jurassic Park. When the resin hardens and turns to amber, the organism becomes a fossil.
Some fossils can also be found in ice. Technically speaking, they have not truly fossilized; they have just become trapped in ice, and so all the biological material could not have been replaced by minerals, which is why many of the original mammoths found frozen in ice have unfortunately decomposed rather quickly. The baby mammoth below is around 37 thousand years old. This specimen was preserved so well because it was engulfed in mud and pickled from the inside out -- fun fact! 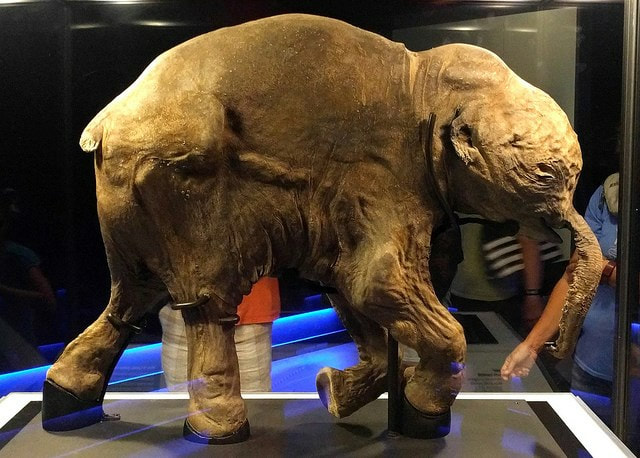 After something dies, it is usually eaten by another organism, or rots away. Very very few organisms become fossilized, as the conditions have to be perfect. Three conditions must be met for an organism to become a fossil.

1. It must be covered by materials that prevent other organisms from eating it
2. Its decomposition has been slowed or stopped because there is no oxygen or the temperature is very cold
3. The material that surrounds the organism has turned to stone and hasn't moved for thousands or millions of years

The best remains have died near a river bed, or live in the water near the ocean floor. 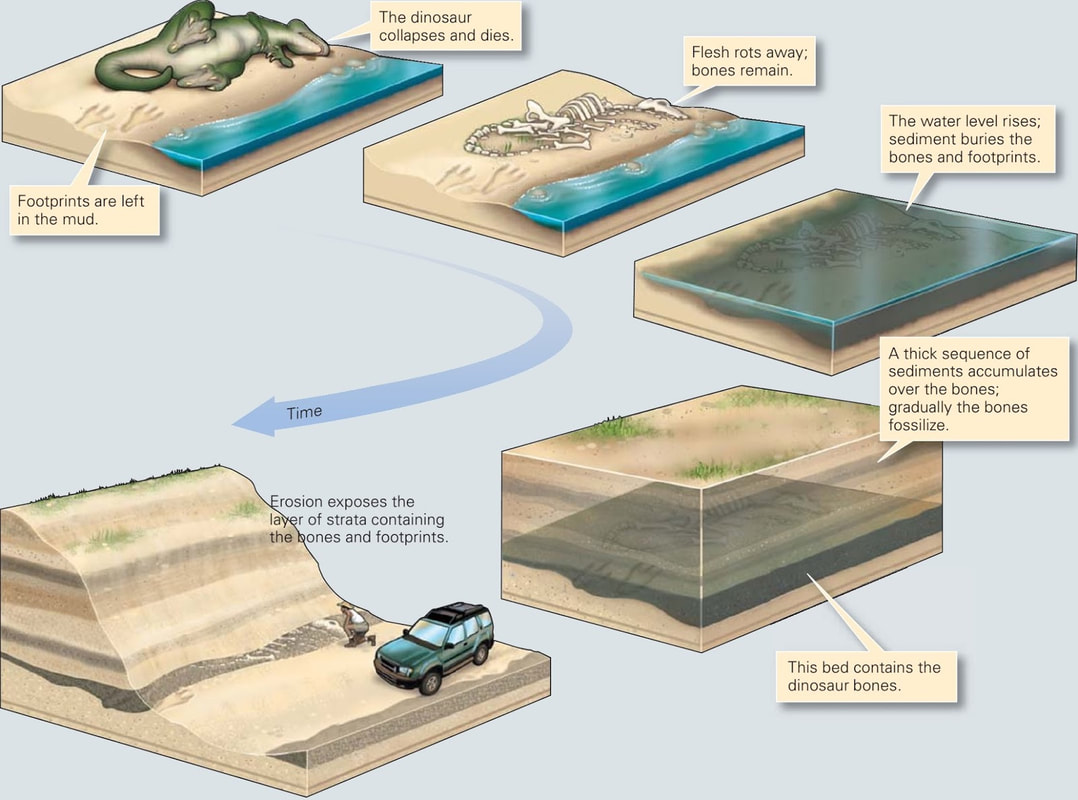 When the sediment accumulates over time, it is deposited in layers. These layers are clues about the age of the fossils. Just like when you make a cake, the bottom layer gets placed first, older fossil layers are usually found below younger fossil layers. This helps paleontologists figure out the order in which evolution took place.

Fortunately, there is another way to find out the actual age of a rock or fossil. Many rocks contain tiny amounts of radioactive or unstable elements that change over time. People use specialized instruments to take detailed measurements of these changes, which gives them the absolute age of a fossil. One of the most popular elements is Carbon. You can measure the age of some fossils using Carbon dating.
So, absolute dating is a more accurate way
​to measure how old a fossil is. 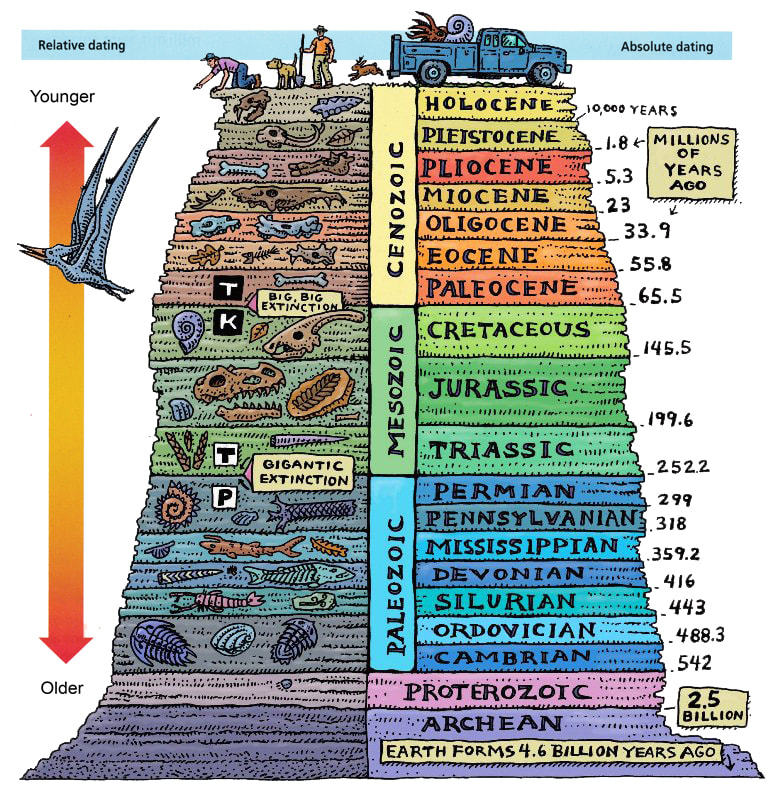 Fossils help us understand how life on Earth has changed over millions of years. They provide evidence of the earliest organisms on Earth. The oldest fossils that have been found are from the Pre-Cambrian Era, and are over 3 billion years old. Looking at fossils helps us understand how their environment might have been like. The fossil below was called "Tiktaalik", which means "shallow-water fish". Why do you think it got this name? What evidence would you look for to confirm this prediction?

Millions of years ago, volcanic activity was very frequent, and lava covered many animal groups. Why do we not find any fossils embedded in lava deposits?

Besides helping us understand organisms and environment from a long time ago, fossils also provide evidence of major changes to species over time.

In 2017, a new species of feathered dinosaur was found in Alberta. Due to a lack of originality, they called it the "Albertavenator." Finding a fossil is easy, but depicting it in an illustration has proven to be very hard. Knowing what you know regarding current birds (the closest we have to dinosaurs), do you think the Albertavenator is more likely to have looked like the image on the left or the one on the right?
Hint: One of these sells tickets!

Based on fossil records, Paleontologists have organized the history of life on Earth into a scale model. This is known as the Geologic Time Scale. It represents the events and changes that took place in Earth's past, and shows how these events are related.

The Geologic Time Scale is divided into four major time periods called Eras, each subdivided into smaller chunks of time.
Fossils provide evidence of species becoming more efficient, complex and resilient over time. They also provide evidence that most of the species that were ever in the Earth are now extinct, or gone forever. Some extinctions happened quickly while others happened over time. There have been five mass extinctions so far, but the most well-known one was caused by a large meteor and decimated the large (non-bird-like) dinosaurs as well as many other species. After that time, there are no more fossils of those species. 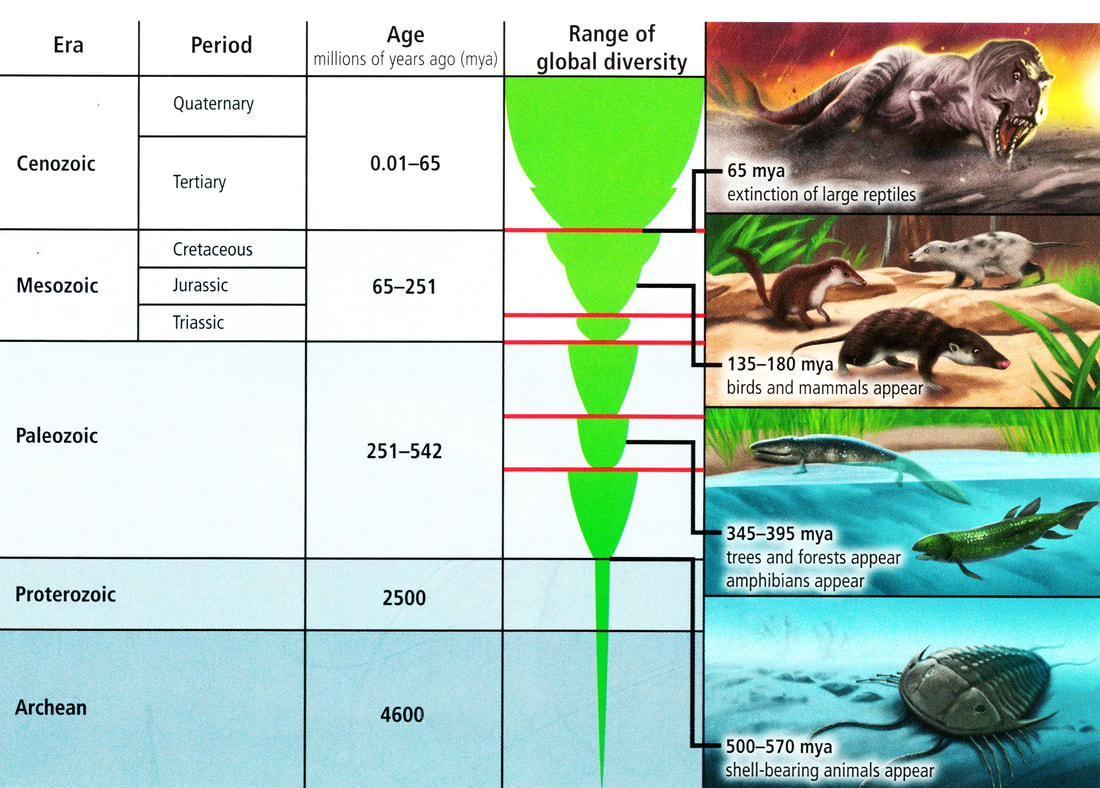 Let's do a quick quiz together!
This is all the theory for fossils we have today. We will be seeing some actual specimens next! Stay tuned.