The Stuff that Binds us

A long time ago, the Ancient Greeks wondered about many things. They became known for asking questions and debating the meaning of all things, as well as thinking about the human condition.

One of the questions they had was, what makes everything we see and touch? They looked at nature, pondered and debated, and came up with four elements.

Watch the video below and pause if necessary. See if anything sounds familiar!
You probably noticed that the four elements the Greeks came up with -- air, fire, water and earth -- are the very same used by Indigenous Peoples.

While interpretations for the Medicine Wheel vary from nation to nation and area to area, they all believe things are created by the same four elements. 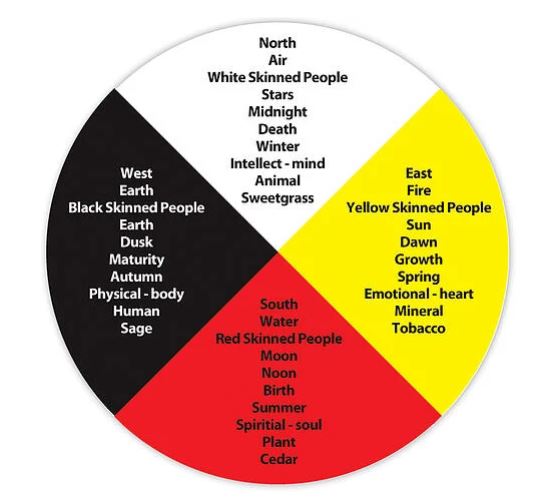 The four elements are bound together by our Creator in a multitude of ways, to create everything we see or touch. But does this negate science? Is science wrong? Are atoms not real? Are cells not real?

While the four elements make everything, they are not the smallest bits of matter.

Scientists have been trying to look closer and closer. Every time they thing they see the smallest, most indivisible particle, they find something else even smaller.

The closer they get, the more they are closer to the truth -- that we are just energy.

A while back, someone I know was studying Biology for a class in university. Knowing how much I believe in magic and the invisible forces that unite us, they came to me with an armful of Biological facts.

My response was, "Seeing all of this, how can you not?"

This is a common mistake that scientists do. Their intent is, sometimes, proving that there is no magic in the world, so they look very, very close, and then say, "See? Everything is orderly and perfect and there is no magic."

But magic is everywhere, which is why I love science so much!

Let's look really close inside the cell, to how the cell communicate the need to create a new protein, or how they move particles inside it.

All these structures, moving to form the protein that we need -- they have no brain, no knowledge, no method of communication that you and I can define.

The Kinesin protein, for instance, is just a few atoms coiled together to form a molecule.

So, while looking really close gives scientists the ILLUSION that they have all the answers, it is only an illusion. No matter how close they get, they see only the puppets; they can never see who is pulling the strings.

And that is the magic of the Universe -- the four basic elements, the four forces that collide to make this world, where spirit can play house.

The more we learn about Western science, the more we can marvel at magic and spirit.

So, keep your eyes and your heart open, and let's learn some amazing science!